Apparently, steam showers are so lovable that people want to use them in the air. In other words, there’s a new steam shower that can be installed in aircraft. Lufthansa Technik, the German manufacturer of aircraft components, has announced its own steam generator that is light weight enough and self-contained for installation and use on luxury airplanes.

Up until now, steam showers weren’t possible on aircraft for two reasons. Aircraft have to remain light weight for flying and the steam will have be self-contained. The steam generator from Lufthansa fulfills both of these requirements.

Lufthansa Technik, a group compromised of 32 companies, announced the product at ABACE 2014 in China. The steam generator is titled Aircraft Steam Generator Systems; this system runs off of vaporizer fluid, instead of being hooked up to the water supply on the airplane, meaning it runs independently when fluid is poured into its port. The steam showers will have to be completely leak-proof for use on airplanes. The steam generator measures approximately 13.5” by 14.3” by 17.3” and weighs 18 kg (approximately 39.7 pounds). It includes a control and steam outlet. The steam will also have to be complete removed from the steam shower after each use.

The Aircraft Steam Generator Systems tackles some of the problems impeding the installation of steam showers on aircraft. In addition to being light weight and self-contained, in order for a steam shower to work safely on an airplane, the design must make it so the steam generator will never overheat during flight. Also, Lufthansa’s steam generator is compact, making it possible to fly in luxury with a steam shower.

You may see steam showers in the air sooner than you know; the steam generator can be installed on any midsize aircraft or larger. It can also be retrofit after the fitting of the airplane. The system also adheres to the guidelines from the European Aviation Safety Agency and the RTCA DO-160G (standard testing for aircraft equipment). The pricing for the steam shower system has not been released, but it is intended for luxury and VIP aircraft and VIP cabins on aircraft. 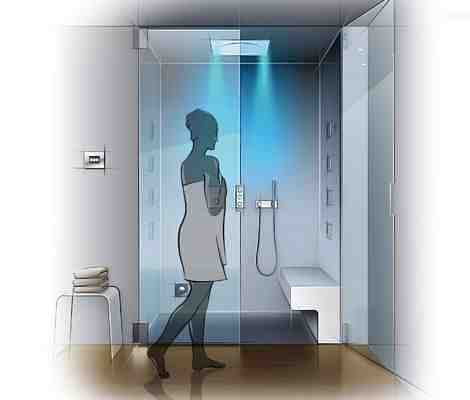 These on board steam showers are very similar in design as the steam showers offered from EAGO. This appreciation for a large company like Lufthansa to put so much investment into making it possible to use steam showers on an airplane speaks volumes to how relaxing and healthy taking a steam shower can be if we’re now installing them on airplanes so they can be used even when we’re thousands of feet in the air. The system from Lufthansa will also include an aromatherapy system for the diffusion of essential oils into the steam shower.

There are many health benefits to bathing in steam and the use of aromatherapy. Bathing with steam assists with respiration, appearance of skin, the removal of toxins from the body and the relaxation of the mind and the muscles. Get your own low cost steam shower for your own Home spa from EagoParts.com and Experience what makes them special.